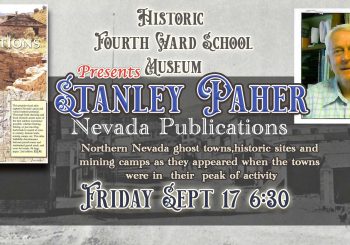 We are pleased to host Western legend Stanley Paher, an author and publisher of 16 Nevada books. His first book, Nevada Ghost Towns & Mining Camps published in 1970 has many unpublished pictures of Virginia City and Gold Hill. In all it contains 710 pictures in all of mining camps in their heyday.
The Sept 17 presentation will cover northern Nevada ghost towns, historic sites and mining camps as they appeared when the towns were in their peak of activity. Paher will close with some color images of some of the towns, and a question and answer session will follow. Let us welcome Stanley Paher!

Click the button below to become a Member or to renew your Membership.

Show your support for the Fourth Ward School Museum with a one-time donation.

The Historic Fourth Ward School Foundation is a tax-exempt 501(c)(3) nonprofit corporation formed and operating in the State of Nevada and registered with Nevada Secretary of State (Federal Tax ID# 88-0463462). Our purpose and mission is to connect people to the relevance and importance of the Comstock story through its authentic preservation, interpretive exhibits and programs, and archival resources. Your donation may be tax-deductible pursuant to the provisions of section 170© of the Internal Revenue Code of 1986, 26 U.S.C. § 170(c).