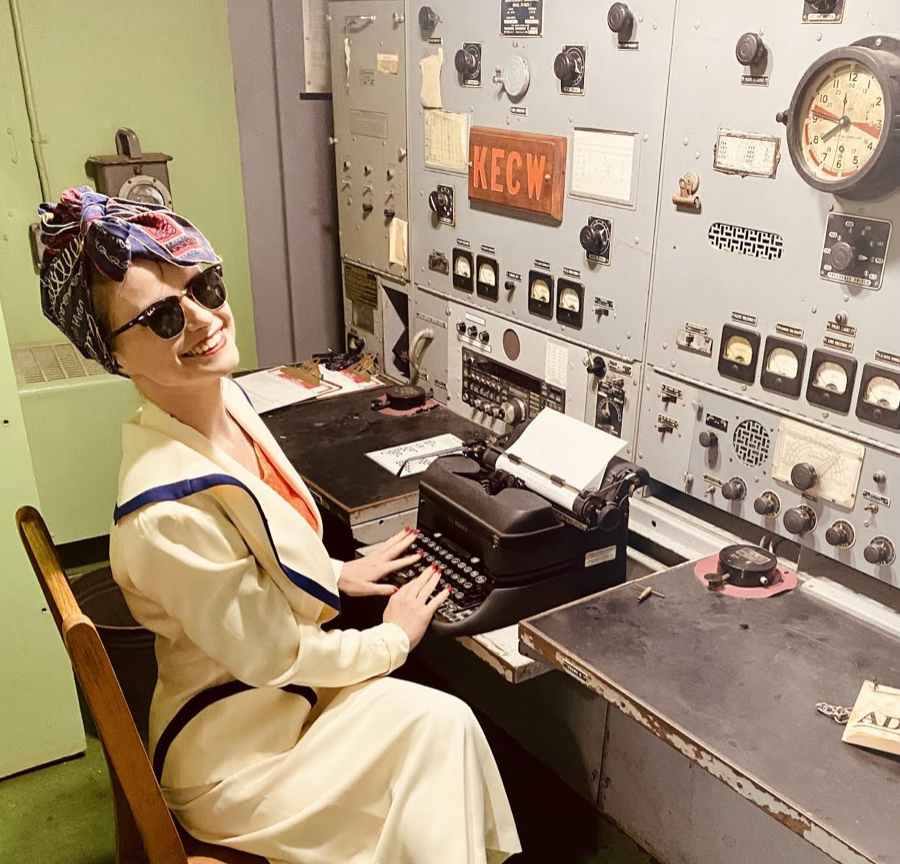 Just as the doors of the Fourth Ward School in Virginia City closed as a schoolhouse in 1936, a new door was swinging open for youngsters all across America: swing dance! Whether you did “Swing”, “the Jitterbug”, “Lindy Hop”, “Balboa” “Jive” or “Shag”; if you were a teenager or young adult in the mid-1930s through the 1940s, swing was the thing!

While there were many regional and musical variations of this then-emerging dance style, each were often upbeat and relatively informal styles of dance when you compared them to the more formal Foxtrot or Waltz style of Ballroom Dance of their parents’ generation. These dances, all under the umbrella term of “swing”, were set to live musicians playing a variety of styles: Big Band, Jazz and even Country & Western.

There are plenty of histories and chronicles of the origins of swing dance out there that have been done with more authoritative study of the subject, so we’re going to spare you on that front. (For one such entertaining and interactive study of swing, you can hop on over to the Fourth Ward School on Friday, April 29, 2022 for a fun lecture-lesson-live band dance event. See details at the bottom of the page.*)

But here at the Fourth Ward School, we’re interested in what dancing was like for the kids on the Comstock in the days where “swing was king”. Virginia City was never the hotspot for swing music or dancing that it was in later years for psychedelic rock, ragtime revival and jazz tunes, but the town wasn’t completely devoid of swing dance in the heyday of the genre, either.

Luckily, Ty Cobb Sr., one of our final graduates as a member of the Class of 1933, grew up to be a writer and left behind lots of colorful memories of life as a kid on the Comstock for us to enjoy today.

“The school-sponsored dances were strange affairs,” Cobb, the venerable newspaper columnist and Virginia City native, recalled in one of his columns for the Nevada State Journal, years later.

“Sometimes we’d get a big band in from Reno, consisting of a drummer, pianist and saxophone players,” Cobb continued. He recalled the big bands would play well past midnight and pass a hat around the audience to collect sparse funds in those days of the Great Depression. But first, “They’d begin with toe-tickling numbers until someone had the nerve to get out on the dance floor.”

“This was a rather embarrassing situation, because the elder ladies of the community always sat in the balcony of the National Guard Hall and took close notice,” Cobb recalled. “It was also difficult for a would-be dancer to cross the dance floor and ask one of the girls for the first dance. This sometimes marked one as ‘going steady’ or snubbing some other gals. We often solved this by asking the girls from Dayton or Carson first, thereby avoiding ‘favoritism’ among the home girls.”

But of course, according to Cobb, the hometown gals indulged in their own sort of favoritism; this time to the chagrin of the local boys. In the 1930s and 1940s, one of the surest ways to get the gal you were sweet on tapping her toes was to have a Bing Crosby tune playing. But of course this also backfired, because every weekday afternoon, Bing had the equal influence to have many young ladies of the day beat feet to the nearest radio for the Bing Crosby’s broadcast every afternoon at 4 p.m.

“We were making good progress with a certain young cutie, impressing her by our sophisticated conversation about the previous weekend’s baseball game with Garderville,” Cobb recalls in another column. “Wide-eyed, she gave us flattering attention. Until the clock gave warning that the hour of four was approaching. Then a look of alarm and anxiety would replace the spell we had cast.”

“‘Oo, oo, oo,––it’s time for Bing!’ she would exclaim. All over the town. And, we are sure, all over the country, many other sweet young things were blacking out their boyfriends and zeroing in on Bing’s broadcast,” Cobb said.

The local boys’ loathing for the King of the Crooners seemed to mellow out over the years, especially after Bing moved to Nevada and began working his cattle ranches in and around Elko (he even became the honorary mayor of Elko in 1948). Cobb says the boys eventually came to respect and admire their fellow Nevadan.

Cobb notes in another column that to really get into “the swing of things”, Comstock teenagers would make their way to the nightclubs in Reno. Cobb and a couple of his pals went to a “Taxi Dance” club on Virginia Street in Reno in hopes to get some lessons in dancing, but the boys received a lesson in life instead.

“Taxi Dance” clubs were, in the 1930s, nightclubs where dancers could pay a dime to dance with a woman for a song. (The custom is immortalized in the song “Ten Cents a Dance”, later popularized by Doris Day and Ella Fitzgerald.)

Cobb and two of his fellow classmates from Virginia City found themselves at a second-story Taxi Dance joint above Commercial Row in Reno in the 1930s, after hearing the siren song of “the toe-tickling music of a saxophone, a drum and a piano” luring them upstairs.

“Having no experience in this line, we three lads from the mining camp were intrigued,” Cobb writes. “After some fidgeting at the downstairs door, we decided to take a hasty whirl at the dime-a-dance thing. Perhaps we might pick up a new dance step or two with which to impress the hometown girls.”

At the top of the stairs the trio were met by a gruff man at a desk that “shoved a handful of tickets” at the boys. These were the boys’ tickets to dance with “a partner in evening gown, heavy make-up and heady perfume.” Cobb remembers they’d engage in small talk with their dance partners as they “guided or shuffled across the slick floor”. Their dance partners would offer the boys advice to “straighten out any flaws we mighthave (sic).”

Cobb recalls the time their dance partners all led the boys to a booth at the club to order a round of drinks. This was of course during the Depression, and the boys had a “dwindling supply of dimes”, after buying rounds of dance tickets. One of their dance partners was also the waitress at the night club and brought the gals “the usual” of what looked like iced tea. And then a second round. And then a third.

The trio each looked to the other to foot the growing drink bill. And each of the others thought their pal was going to be the bill’s benefactor. The boys saw little choice but to high-tail it downstairs and try their luck at a different kind of dance: “The Bouncer Bounce”, also known as the “Skirt-the-Bill Shuffle”!

They hid under parked cars to escape the club’s manager and bouncer (and their billy club) until the latter gave up and went back upstairs. The boys emerged from under the cars and made their way back up the hill undetected, but Cobb admitted he still felt the twinges of shame for their boyhood misadventure in dancing even fifty years later.

If you’d like to hear more stories about the origins and lively anecdotes from the era of swing, the Historic Fourth Ward School Museum is proud to present an educational and interactive night of swing dancing on Friday, April 29th, 2022.

Chris “C.W.” Bayer, musician and historian of nevadamusic.com , will entertain and enlighten you with a presentation on a brief history of the roots of swing music.

Then, you’ll learn how to do the basics of swing dance yourself with the guidance of instructor Clay Mitchell from Reno Swings! and the Northern Nevada Lindy Hoppers. Reno Swings

After that, you’ll be ready to dance to the swingin’ sounds of Chris Bayer with “The Honky Tonk Bums” for a live music social dance.

The event will be on Friday, April 29 from 7 p.m. to 9 p.m. at the Historic Fourth Ward School Museum in Virginia City  (537 South C Street, Virginia City, NV). Tickets include the lecture, swing dance lesson, and live concert and social dance for $15. Our museum members receive discounted admission of $10 per ticket. Purchase tickets here.

If enough interest and attendance is garnered for this event, the Fourth Ward School Museum would love to make these dance nights with live bands a regular, recurring feature among our roster of unique historic and cultural programming hosted at the museum with you in mind.

First, Download and Fill Out the Form. Then, either mail it with your payment or call in to join over the phone.
Download Form
Call-In Membership
775-847-0975 xt 1